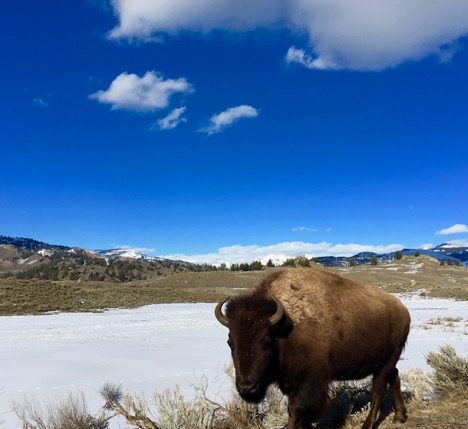 Holistic large landscape conservation is not a new concept to the Blackfeet Nation of northern Montana. For a millennia, the integration of natural and human systems has been central to the physical and spiritual wellbeing of the Blackfeet people, and this ethos continues today. Blackfeet Leader Chief Old Person said recently, “We must act to preserve ourselves by conserving our culture and our lands for future generations; it is up to us to be wise stewards of our land.” The Blackfeet Nation embraces holistic, landscape-level approaches to planning and land management with the goal of sustaining the ecological health of the lands that are vital to their cultural and traditional practices. A powerful example of this has been their work to bring back wild buffalo, a decision reached after much consultation in 2013. Though the reintroduction of buffalo is but one of the emerging opportunities, it serves to underscore their holistic approach to large landscape conservation. Although this approach is often complex and time consuming, it is vital to ensuring that the unique natural and cultural heritage of the Blackfeet Nation won’t be lost.

The Blackfeet are a Plains Tribe whose subsistence and livelihood centered on buffalo, until the vast herds were wiped out by the U.S. Army and European-American hunters in the late 1800’s. The extermination of these herds caused the calculated decline of a thriving Blackfeet culture and livelihood, a decline that continued for decades as the United States adopted destructive policies that greatly impacted native people. In 2008, tribal elders from the transboundary Blackfoot Confederacy convened to highlight their concern that youth were forgetting the relationship the tribes have with the buffalo; they felt it was important for the tribe to honor this deep spiritual relationship. This concern led to the creation of the Iinnii Initiative (Iinnii means buffalo in the Blackfoot language) and a series of “buffalo dialogues” among tribal elders (more on Iinnii initiative). The dialogues always had an empty chair for the buffalo. The elders report that the buffalo challenged the group with the question, “If I return, what are you going to do? How will you manage the land and make it possible for buffalo to survive and be healthy?” These questions prompted years of conversation across the landscape among many tribal groups about the value of the buffalo to culture, landscape, and livelihood.

The 1.5-million-acre Blackfeet Reservation is part of the traditional homeland of the Blackfoot Confederacy of northern Montana and southern Alberta. The Blackfeet Reservation in Montana is bordered by Glacier National Park to the west and the Canadian province of Alberta to the north. It is part of the well- known 22-million-acre Crown of the Continent landscape (“The Crown”), which is twice the size of Vermont and New Hampshire combined. The Crown is home to several long-standing, collaborative landscape conservation efforts — The Roundtable on the Crown of the Continent and the Crown Managers Partnership to mention a few. Rich in culture, resources and wildlife, the Crown is the last place in the contiguous United States to continuously host all its native mammal species. The Crown water resources and glaciers of Glacier National Park feed three continental watersheds: the Missouri, Columbia and Saskatchewan. Climate change is impacting these water supplies at an accelerating rate and the hundreds of glaciers that were present at the turn of the 20th Century have been reduced to just over 20. These remaining glaciers are expected to disappear in the next 25 years. Like most areas of the planet, natural ecological systems of the Crown are being threatened by climate change impacts, habitat loss and fragmentation, water scarcity and degradation, invasive species infestation, and more. Not only are Blackfeet communities directly impacted by these changes, but communities hundreds of miles downstream will also be impacted.

In addition to rapid land and environmental change, the Blackfeet Nation is also facing social and political change. Through the Elouise Cobell land settlement the U.S. federal government has purchased nearly 400,000 acres on land within the reservation that will be returned to the Blackfeet to manage as Tribal Trust land. In addition, the Blackfeet recently ratified their water compact, which will provide a large payment for negotiated water rights and double the water available on the reservation. Additional tribal land and more water, along with additional funds, create a rare opportunity to balance economic growth with protecting land and culture.

Land planning efforts are being supported by a progressive Blackfeet Tribal Business Council that prioritizes collective conversations about how tribal members wish to shape their relationship to the land for generations to come. They are working to build awareness among tribal members so all can be included in the holistic process. Two management plans are currently underway: the Blackfeet Agriculture Resource Management Plan and the Blackfeet Climate Adaptation Plan. Both plans are being built through collaboration and will inform each other through what is often a complicated, slow process. Both efforts are working with non- tribal partners through the Roundtable or other regional committees to ensure that the larger landscape, recognized as the lifeblood of their home, is considered.

In the face of this environmental, social, and political change, the Blackfeet people are realizing new opportunities to pursue planning and management in ways that reaffirm their cultural heritage. Action around the Iinnii Initiative to bring buffalo back, and events like the cancellation of 15 drilling leases on the sacred Badger Two Medicine Forest Service land, are early examples of culture informing conservation in land use planning. The “Buffalo Treaty” in particular is an important step by native people to practice conservation while preserving culture. In 2014, a tribal treaty convention in Blackfeet Territory committed the northern tribes and First Nations along the Medicine Line (the international boundary with Canada) to promote the conservation of prairies and the repatriation of the American buffalo. To achieve this vision, the treaty calls for engagement with researchers and partners in federal, state and provincial governments; farmers and ranchers; conservation groups; and Native American youth. The treaty has led to the return of buffalo to Banff National Park to the north and Fort Peck Reservation to the east and has now been signed by nearly 50 sovereign nations, mostly indigenous. It supports collaborative work on buffalo, the verification of traditional rights, and the pursuit of agreements to make surrounding federal, state and provincial lands available for buffalo.

As the Blackfeet have embraced opportunities to approach planning and management decisions from a holistic perspective, it’s clear that their work is showcasing lessons for a broader landscape conservation framework. Indeed, central to the Iinnii Initiative is multi- cultural conversations, landscape connectivity, interagency cooperation, spatial analysis and creative land and water management – all elements that likewise are central to landscape conservation. The work that started in the Blackfeet Nation as a result of a conversation about culture and traditional values has spread throughout the region. It is being widely supported by agencies, nonprofits and individuals including the Wildlife Conservation Society, the Center for Large Landscape Conservation, the Yellowstone to Yukon Initiative, the Roundtable on the Crown of the Continent, the Great Northern Landscape Conservation Cooperative, the Montana Wilderness Association, The Nature Conservancy, Glacier National Park, and many more. The Blackfeet success with collaborative planning and land management is allowing them to be leaders in conservation in the region while preserving cultural values and employing the best western science.

About the author: Melly Reuling’s work with the Center for Large Landscape Conservation (CLLC) in Bozeman, Montana centers around connecting people to make the best decisions for healthy connected landscapes and thriving communities. Integrating collaboration, community values, traditional knowledge and western science into conservation is fundamental to CLLC’s regional and international work. CLLC has been working with the Blackfeet and other Crown tribes for nearly a decade.

Beyond the Banks: Collaborative Conservation in Montana’s Big Hole Valley

Ranchers don’t really raise cattle, according to John Richardson. They raise grass. Richardson, who owns the Hat Creek Ranch in...